“mcrIT have helped future proof our business through the implementation of proactive monitoring, redundancy and security to our IT network.” 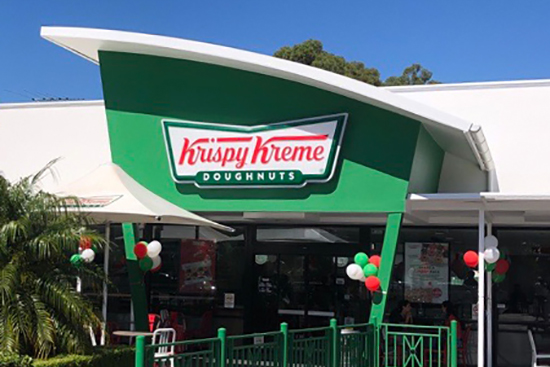 Sweet treat brand Krispy Kreme, launched in Australia in 2003. The Australian market was the first country outside of North America to make the iconic Original Glazed Doughnuts.

The company has employed an omnichannel strategy, a distribution model where Krispy Kreme makes doughnuts in its classic “Hot Light Theater Shops” and “Doughnut Factories” that function as centralised production “hubs.”

The doughnuts are then delivered to “spokes,” or points of access outside the company where customers can buy fresh doughnuts. In ANZ, these points include their own doughnut shops along with commercial partners 7-Eleven, BP and Woolworths.

In order to support this retail network, and with new shops opening regularly, Krispy Kreme engaged mcrIT to support their IT strategy of becoming more secure, accessible and efficient.

The move to Cloud based application, a combination of aging IT equipment and network outages meant that retail shops, manufacturing sites and offices were experiencing downtime that was impacting sales and customer/staff experience. In addition to the disruption in customer service, remote and physical support within 2-24hrs SLA was not sustainable in-house with the growing demand on IT services.

‘’mcrIT supports the network that drives our omnichannel distribution strategy through the rapid deployment of IT infrastructure at our new retail shops, to the complete management of our entire IT network. ”

mcrIT completed an infrastructure and network upgrade project across 40+ retail shops and sites in Australia and New Zealand over a 6-month period.

This included a migration to nbn and an implementation of Cisco Meraki switches and WiFi. The cloud-based controller enables proactive monitoring and incident response, as well as quick remote deployment of new sites.

All shops are supported by mcrIT’s managed network services, which include proactive monitoring, patching and after hours’ helpdesk.

As a result of the upgrade, the Krispy Kreme shops have experienced faster internet speeds and less downtime and outages. “We have seen an average trend of 500+ monthly support tickets reduced to under 300 due to the now stable IT infrastructure across our network.” Jason Fraser, Head of IT, Krispy Kreme ANZ

Sites are managed more efficiently through a central location and there is redundancy built in to the network.
Network security has been significantly improved and regular testing is conducted for ongoing improvement.

‘mcrIT supports the network that drives our omnichannel distribution strategy through the rapid deployment of IT infrastructure at our new retail shops, to the complete management of our entire IT network. Jason Fraser, Head of IT, Krispy Kreme ANZ